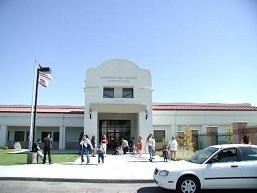 Antonio Del Buono Elementary School, located at 9300 Wren Avenue, Gilroy, California 95020, is one of eight elementary schools in the Gilroy Unified School District. The city of Gilroy is located approximately 20 miles south of San Jose at the southern end of Santa Clara county. Historically, Gilroy has been an agricultural community and is known worldwide as the "Garlic Capital of the World."  Each summer thousands of people from all over come to Gilroy to celebrate garlic during the "Gilroy Garlic Festival."

In July 1999, Antonio Del Buono Elementary school opened for the first time with four temporary classrooms (Grades K-3) located on the site of a neighboring school. In July 2000, the new campus was opened. The school has 33 classrooms, a library, two computer labs, a multi-purpose room and an on-site kitchen. The school has a central courtyard and interior hallways where teachers display their students' work for all to admire.

The school was named for Antonio Del Buono, who contributed much to the Gilroy community during his lifetime. He was active in the union organization of agricultural and cannery workers during the 1960's. Antonio Del Buono worked with the California Rural Legal Assistance organization to provide legal services to people who could not afford it. He said, "A good education builds a good citizen."